When we think about all the amazing inventions and discoveries associated with NASA over the last half century, it’s impossible not to wonder what the future holds. Even though the shuttle program is over, and the only place to see a NASA-manned vehicle is a museum, engineers are hard at work designing a new rocket system designed to send astronauts to Mars. 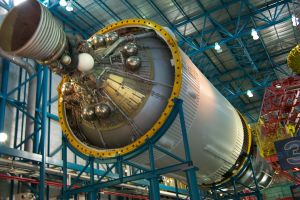 One thing that may come as a surprise is, despite all of the cutting-edge technology, asbestos has played a major a role in spaceflight, and, to some extent, still does. As discussed in a feature from NASA Spaceflight.com, asbestos-containing material has been heavily used in various aspects of rocket design and heat shielding technology.

One the one hand, it is easy to see why asbestos was, and still is, a somewhat favored material. It is a naturally occurring element, which is easy to mine, and cheap to refine into manufactured products. It an excellent insulator from heat, caustic chemicals, electricity, and fire, and it can also be spun into extremely lightweight textiles. Weight reduction is a major goal in spaceflight, as these machines have to reach speeds of around 20,000 MPH to clear Earth’s atmosphere and get into space.

The problem with asbestos, of course, is that it is highly toxic to anyone who inhales the deadly microscopic fibers. However, since many other materials used in manned spaceflight are also toxic and highly combustible, one could see why engineers are willing to put up with some asbestos, as long as the crew compartment is properly shielded, which it must be anyway to keep astronauts safe in space.

On the other hand, the solid rocket boosters detach from the space delivery vehicle and fall back to Earth, where they land in the ocean and are recovered by NASA crews who must handle the rocket pieces and take them back to a refurbishment facility. At the end of they day, any use of asbestos puts people in danger, and NASA has a desire to avoid that.

One form of asbestos commonly used in rocket engines is chrysotile-filled rubber. Chrysotile, as our Boston mesothelioma attorneys can explain, is form of asbestos once commonly used in industrial applications as a heat insulator. This material was placed in between the sections of the solid rocket booster segments and used to fill gaps, or “voids,” as they are called in the industry. It is essential for these voids be sealed properly, and in a way that will stand up to incredible heat. After all, it was a leak in one of these voids that allowed a flame to cut through the Challenger’s main fuel tank, which was responsible for its tragic explosion.

Despite the importance of having a proper void seal, NASA has been experimenting with alternative materials, which do not contain asbestos, and, while they have never been tested in manned spaceflight, they have proven effective in all ground tests, and it’s believed with the retirement of the shuttle fleet, we have seen the last of asbestos-filled rocket engines.