On the 15th anniversary to the 9/11 terror attacks in New York City and Washington, DC, Vice President Joe Biden choose to speak about how these events rocked our nation and about how the many rescue and recovery workers were exposed to a great deal of toxic dust, including some that contained deadly asbestos fibers, according to a recent news feature form Yahoo News.   This is part of the Cancer Moonshot program launched by President Barack Obama at his last State of the Union Address. 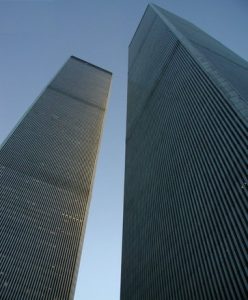 The Twin Towers of New York City’s World Trade Center complex, as it existed in September 2001, were constructed at a time when asbestos was used in virtually every aspect of construction.  World Trade Center One and World Trade Center 2 (the formal names for the Twin Towers) were no exception to this, and neither were the other buildings and underground structures that surround the Twin Towers. When those buildings fell, there was a huge cloud of dust that engulfed much of lower Manhattan.  Immediately following the attack, firefighters, EMTs, police officers, and other workers from the military combed the wreckage for any sign of survivors.  This rescue effort lasted for the first couple of days, and there were some people rescued, including two Port Authority Police officers whose story became the basis for a documentary style film starring Nicolas Cage.

As these rescue efforts were ongoing, the workers were constantly being exposed to deadly asbestos fibers and other toxic material.  They did not have proper safety equipment, but there was little choice, and they forged ahead.   Once it became apparent that that anyone missing was no longer alive, the rescue effort turned into to a massive recovery effort.  Workers came from all over the country to find and recover the bodies of the thousands of civilians as well as the emergency personnel who perished in the unthinkable event.

There are many photographs showing recovery workers completely covered with a thick coating of gray dust, and much of that dust contained deadly asbestos fibers. Actor Steve Buscemi, who was once a New York City firefighter, rejoined his old fire company to look for survivors, and he did this with little fanfare and did not notify the press, but he did later produce a documentary that showed the conditions faced by these brave men and women.

One of the things that makes these fibers so dangerous, as you can discuss with your Boston mesothelioma lawyer, is that they are microscopic in size and basically undetectable in the human body.  Doctors will do a tissue biopsy, which often involves surgery, when they suspect mesothelioma, but they will not biopsy healthy tissue soon after exposure.  The human body has no way to remove these deadly fibers, and doctors do not either.

Once the fibers become trapped in a layer of tissue known as the mesothelium, they can metastasize into the deadly form of cancer known as mesothelioma.  It typically takes between 20 and 50 years for a victim to develop noticeable symptoms of mesothelioma, and by that time the cancer is usually very advanced.