There is no question traffic is a major problem in Boston. Many of the roads and bridges were built at a time when such a high volume of traffic was never contemplated. Much has been done in the past couple of decades to alleviate traffic. Anyone living in Boston in the late 1990s and early 2000s remembers the Big Dig project to replace the central artery bridges with an underground highway. 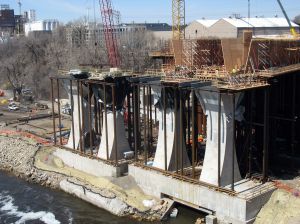 Now a fight between residents and Department of Transportation has arisen over the fate of the Casey Arborway overpass. City officials intend to demolish the bridge and replace it with a series of surface streets designed to facilitate flow of traffic. Many residents feel a bridge is needed, so their respective back yards do not become parking lots full of vehicles stuck in traffic. Some have suggested the existing overpass be restored and used in the new project. City officials seem steadfast in their desire to demolish the bridge, and the project is underway.

Interestingly, at a recent public meeting covered by Wicked Local, an official was asked if tests were done to determine if old bridge contains asbestos, and his answer was he didn’t know. As Boston asbestos exposure lawyers understand, this should be a major concern to Department of Transportation and residents alike, as asbestos could be released into the environment during restoration or demolition.

When asbestos fibers are inhaled, they can become embedded in a layer of tissue known as the mesothelium, where they can metastasize into a deadly form of cancer known as mesothelioma, lung cancers, and other respiratory illness. Asbestos can also cause scarring of lung tissues known as asbestosis. Though not as deadly as mesothelioma in most cases, asbestosis can cause severe breathings problems, and without proper treatment, can become fatal.

In a restoration or demolition product involving asbestos, the asbestos material can become friable. This means it is capable of being crushed by the power of a human hand. Friable asbestos provides the highest risk of being inhaled if not properly contained. On a job site where workers are not properly trained and wearing asbestos protection clothing and a respirator or ventilator, the risk of exposure is high.

Asbestos can also be introduced into the air, where it can affect those around the construction site. This problem is compounded, because once fibers are inhaled, there is no feasible way to detect to their presence or remove them. Once inhaled, they normally take between 20 to 50 years to cause detectable symptoms. By the time a mesothelioma victim begins suffering to a point where he or she goes to see a doctor, the patient may only have a very short time left to live, as the disease is typically in an advanced stage at this point.

If you have been diagnosed with mesothelioma or asbestosis, one of the most important things to do is try to determine when and were you were exposed to asbestos, keeping in mind exposure likely happened decades ago.