In some ways, a mesothelioma diagnosis can be worse than a gunshot wound.

For one thing, a bullet wound is quick. 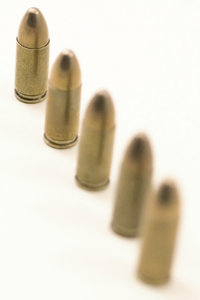 You are able to tell right away exactly where it is and what it is. Plus, being shot isn’t necessarily a death sentence.

Our Boston mesothelioma attorneys know that mesothelioma is the opposite of all these things, as one California gun shop owner is learning.

According to a report in the Tracy Press, the businessman began getting sick several years ago. He was experiencing a tightness in his chest and breathing problems. He suspected it might be mold in his older office building.

But when inspectors were called to look, they weren’t able to find anything.

It wasn’t until later that he determined that asbestos was present in the building. That in and of itself might not have been enough to cause alarm, but it was determined to have been airborne – the element that makes the compound deadly.

The shop owner later said he suspected that the substance may have been kicked up during a burglary a decade ago. That’s when a pair of thieves reportedly sliced into the roof and ceiling – and through the asbestos-laden ceiling tiles – to get to the guns.

It was later determined that the building’s wallboard and joint taping compound also contained asbestos.

Doctors told him that this was likely the cause of his “mysterious” illness, and he needed to vacate the premises immediately.

Asbestos was used in a large number of manufacturing products up through the 1970s. It was particularly favored for insulation and other building materials because of its flame-retardant properties.

However, the companies that manufactured these products knew more often than not that the asbestos was harmful, both to workers and potentially consumers.

It’s common to find asbestos in older homes or structures. It’s not necessarily inherently dangerous in and of itself. The problem is when those particles are disturbed and become airborne. That can happen either during renovations, or demolitions – or burglars cutting through the roof.

The entrepreneur closed shop immediately after doctors discovered abnormalities in his lungs, though it has yet to be determined whether the ailments are mesothelioma. If in fact it is mesothelioma caused by exposure to asbestos from that burglary, it could be years before he gets a definitive diagnosis. That’s because mesothelioma is a disease that takes years to develop following the initial exposure – although it’s not surprising this individual is already experiencing symptoms, 10 years later.

In this case, it appears the repairs weren’t properly made as to contain the asbestos dust.

In a situation like this, one may be able to hold the landlord or his contractor liable for the exposure, particularly if they knew or should have known asbestos was present in the building and failed to address that issue during the course of repairs following the burglary.

Catching the disease early is key to ensuring sufferers live the longest and highest quality lives possible. This individual may have been relatively lucky, in that it seems he discovered the cause of his illness within just 10 years. It often takes much longer than that for the disease to manifest and for doctors to issue a firm diagnosis.