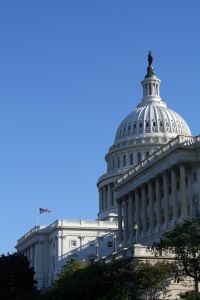 However, according to a recent article from Fox News, an asbestos scare has caused the Architect of the Capitol to close the 114-year-old building for major renovations. It should be noted that the Architect of the Capitol (AOC) is not a person but the federal agency responsibly for maintaining the condition of the many federal buildings on Capitol Hill and for handling any major construction or renovation projects.

The building had been undergoing major renovations, but it was still open for business. The closure was a result of testing of air samples for the ventilation system that indicated there was potential release of asbestos fibers into the building heating, ventilation, and air conditioning (HVAC) system.

According to building officials, there were subsequent tests done, and those reportedly came back negative for asbestos. While this may reduce the chance anyone inhaled the deadly fibers, it not something they were willing to take any chances with, and the building will remain closed during the renovation project.

There are also reports that the United States Capitol Police are conducting an investigation into the possibility of criminal activity being responsible for the introduction of deadly asbestos fibers into the building.

While this is technically a possibility, it doesn’t seem likely, given the way in which asbestos affects victims. Unlike anthrax, which we have seen used as a poison or as part of terrorist plots, asbestos doesn’t kill people in a matter of days or even weeks. It is very deadly but not even close to fast acting. While it is true that even a small amount of asbestos inhaled for a short period of time can, and often has, lead to eventual death, it generally takes between 20 and 50 years for a patient to notice any symptoms of malignant pleural mesothelioma. Once symptoms are detectable and victim goes to his or her doctor for answers, a patient who learns he or she is dying from a mesothelioma injury generally has only a short period of time left to live.

The fact that it takes decades for someone to become noticeably sick following asbestos exposure is the reason companies were able hide the deadly nature of asbestos from the general public, including those working with it every day. They could use asbestos as much as they wanted, and, while they were making many people sick, nobody would know about it for years, and they were far more concerned about short term profits that long term consequences.