When it was first built, the Houston Astrodome was seen as marvel of modern engineering, which would be a gateway to the future of stadium construction. It all began, according to a recent news feature in The Guardian, with a young girl asking her father why people couldn’t play baseball indoors. She was unhappy when minor league games would get rained out, because that meant she had less time to spend with her dad. 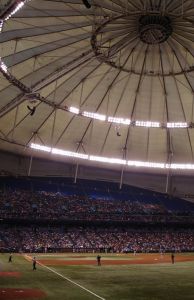 Her father found the idea interesting and spent the next several years getting funding and support for what would be eventually be named the Eighth Wonder of the World by media agencies. Construction was complete, and the Astrodome opened to the general public at the beginning of the 1965 baseball season. President Lyndon B. Johnson attended the game, along with more than 20 astronauts from NASA mission control in Houston, and they all simultaneously threw out a first pitch before the exhibition game between the Astros and the New York Yankees. Mickey Mantle hit a home run during that game.

Today, 50 years after the Astrodome was hailed as modern-day marvel, it sits abandoned and boarded up to prevent trespassers from being exposed to the deadly asbestos-laden building materials, which were heavily used during stadium construction.

As our Boston mesothelioma attorneys can explain, while the general public was not aware of the dangers associated with asbestos inhalation, including construction workers in direct daily contact with asbestos, industry insiders were very much aware of the harm being caused by their toxic product.

Companies involved in mining and production operations took great efforts to keep the public from becoming aware of the risk of asbestos inhalation, so they would continue making huge profits on a material that is cheap and very effective at resisting heat, fire, caustic chemicals, and electricity. The reason they were able to keep the dangers of asbestos from the public is because they knew it would take between 20 and 50 years for those exposed to the deadly fibers to become sick. Once a person started possessing symptoms of mesothelioma, they would usually only have a short period of time left to live, and there was nothing doctors could do to cure the disease.

As for the future of the Astrodome, once asbestos abatement can be completed, designers hope to replace the Astroturf, named after the stadium itself, with natural grass, and construct an enormous indoor park containing play areas and other recreational activities. Once completed, the re-purposed Astrodome will be one of the largest indoor parks in the world.

While it was highly impractical to use natural grass when the stadium opened in 1965, with today’s advancements in indoor grow operations, they can more easily create a natural landscape, as has been done in more modern dome stadiums.

This was not the only idea for what to do with the aging structure, as other ideas ranged from tearing down the structure to building an indoor ski area with man-made snow, as developers have done in other places such as Dubai.