The estate of a man who died after a battle with mesothelioma has filed a wrongful death lawsuit in New Orleans against some of the nation’s biggest companies, including Viacom, Inc., General Electric Co., Uniroyal, Inc. and others.

Boston Mesothelioma Attorneys are available to represent clients from throughout New England who have been diagnosed with mesothelioma and other asbestos-related illnesses. Mesothelioma in Boston is an incurable and fatal cancer that usually takes 30 to 40 years before a diagnosis is made. 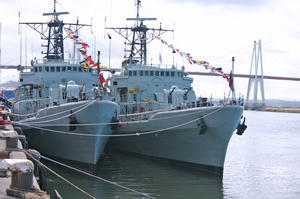 That’s because people have ingested the microscopic fibers, which travel through the blood stream and attach to the walls of major organs, such as the lungs and heart. They stay for years and sometimes decades before people experience symptoms and are diagnosed.

Some common symptoms, according to the Mesothelioma Cancer Network:

In the case in New Orleans, the man was diagnosed with mesothelioma in 2010, the article reports. And the lawsuit alleges he was exposed to asbestos while he was aboard United States Navy vessels from 1966 to the late 1970s. The lawsuit states that exposure was a result of asbestos dust emanating throughout the USS Rehoboth, the USNS Albert J. Meyer, the USNS Flyer, the USNS Wyman, the USNS Kingsport and the Sgt. Alfred Shoup.

The United States military was one of the largest consumers of asbestos in the early and mid 20th century. The military used it on Navy ships, Army barracks, U.S. Air Force planes and other products. And 70 percent of the vermiculite, a natural mineral that contains asbestos, was mined in Libby Montana and shipped to plants across the country to be exfoliated.

Asbestos was used for insulation, to create floor and ceiling tiles, peat moss, gardening and landscaping products and other uses. While it has never officially been banned in the United States, it’s use has been severely curtailed in the last two decades because of its effects.

Many companies knew of the effects or at some point discovered the problems asbestos can cause but did nothing to protect workers. And many Americans were wrongfully exposed to asbestos, which can cause mesothelioma and other fatal diseases. Those who were wrongly exposed years ago should seek justice. First, see a doctor that specializes in asbestos-related illnesses and then call our law firm to discuss your rights.