According to a recent news report form NPR, the interview subject was doing well in life. He owned a flooring company that was just awarded a good contract. He was on his way to work one morning when he decided to stop at a fast food restaurant to get something to drink when he felt a sharp pain in his stomach. He described how he collapsed in pain and said it was like he had been stabbed in the stomach with a large knife. At this point, he was being driven to the emergency room by a coworker. 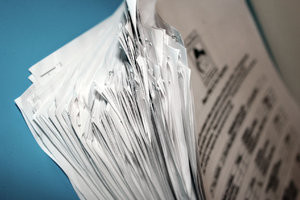 When he woke up, he was in a hospital bed. He saw his wife crying and asked what happened. She told him when doctors looked in his stomach, they found it was full of malignant peritoneal mesothelioma tumors. His doctor told him he did not have very long left to live. He was 39 years old, and this was the first he learned that was his sick, let alone dying of cancer.

He said after he learned of his diagnosis, he consulted with a lawyer, and they figured out that he was exposed to deadly asbestos fibers about ten years ago while he was working as a fiber-optic cable installer. When deadly asbestos fibers are inhaled, they become trapped in a layer of tissue known as the mesothelium. Once there, doctors have no way of detecting them without a biopsy, which they won’t do without suspecting cancer. However, even if they did detect the fibers, there is nothing they could do to remove them anyway.

The fiber-optic cable was being inserted into a pipe made from asbestos. Workers were required to cut the pipe open and insert the cable, and this generated a lot of asbestos dust, which the workers inhaled.

Asbestos was used for thousands of years, as it is a naturally occurring substance. However, it was during the industrial revolution that it was being used in nearly all aspects of production. Based upon the amount of time it takes to become sick after exposure, sickness comes in waves spanning decades. In the 1990s, mesothelioma injury lawyers, doctors, and public health officials met to discuss the problem and predicted there would be a third wave of mesothelioma victims. This victim interviewed for the article marks the beginning of third wave predicted in the 1990s. While he was told he would probably not survive more than a year or two, he is doing everything possible to extend his life and has chosen to undergo surgical procedures to remove the abdominal tumors followed by heavy doses of radiation.