One of the worst things about mesothelioma diagnosis is that diagnosis normally occurs when the disease is in such an advanced stage that there is nothing much doctors can do to actually cure the patient. Doctors may be able to perform very aggressive surgical procedures followed by massive amounts of chemotherapy and radiation, which can prolong or extend life of the mesothelioma patient by several months, but the vast majority of patients die within 18 months of learning they have the disease. 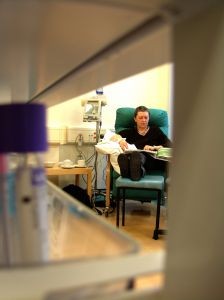 While many people think mesothelioma is actually lung cancer, it is technically an entirely different form of cancer that can occur in the lungs. However, asbestos can also cause lung cancer and other forms of serious respiratory illness. One of the things about mesothelioma is that it often takes between 20 and 50 years from when a person first becomes exposed to asbestos to when they have symptoms of mesothelioma. By the time they have symptoms and go to a doctor, the cancer has likely spread to other areas of the body and is terminal.

However, if there was a way to detect the cancer earlier, it might be possible to treat the patient when the cancer is more vulnerable to chemotherapy and radiation or removal with surgery. According to a recent article from News-Medical, a test known as ONCOblot is showing promise in the early detection of mesothelioma.

MorNuCo, the company developing the new test, has just completed retrospective clinical trials involving the early detection of mesothelioma. This early testing showed that ONCOblot was able to detect a molecular marker that occurs in patients with mesothelioma. This marker was detectable when the cancer was in a stage anywhere between four and ten years before a patient would typically develop symptoms prompting them to go to a doctor for testing.

In the typical mesothelioma injury case, there is often less than a year from the time a patient is first diagnosed until death occurs. This is an unfortunate reality. If doctors were able to detect mesothelioma ten years earlier, there is a decent possibility things would work out much better for victims and their families.

The way a retrospective clinical trial typically works is that the researchers are taking old blood samples from prior studies and performing new tests on the samples. If they knew a sample was taken 10 years before a patient developed symptoms and the new test showed the presence of the genetic markers, they would say it worked to detect the disease ten years prior to the onset of symptoms. Eventually, new clinical trials would be needed to test the efficacy of the molecular test.