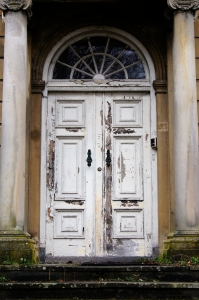 According to a recent news article in the Lowell Sun, the old Dracut Town Hall building, which was scheduled to be demolished, contains several asbestos “hot spots” in the under the slate roof. This discovery has caused the previously scheduled demolition project to be placed on hold for an indefinite period of time.

The building was constructing in the early 1880s and used as a small school prior to being substantially expanded during renovations in the past 100 years. While the building served as a town hall for the past 100 or so years, it had finally outlived its usefulness and was slated to be razed.

The New England-based demolition contractors discovered asbestos in the roofing material soon after commencing work on the project.

As our asbestos lawyers in Boston understand, the town can be held legally responsible for asbestos dust released into the air in the surrounding area during the demolition process. In order to continue demolition, a company that is certified in asbestos removal must be hired to inspect the process, make an assessment, and obtain permits from the Massachusetts Department of Environmental Protection and other Commonwealth officials before work can resume.

This is an expensive process, but an extremely important one. If workers or town members are exposed to asbestos fibers, they are likely to cause a deadly form of cancer known as mesothelioma. They can also cause lung cancer.

While this was not known to most workers and consumers at the time the asbestos was heavily used, the companies that manufactured it were well aware of its carcinogenic effects. These companies also knew that it would take between 20 and 50 years to develop symptoms of mesothelioma, and they were willing to take that risk (on behalf of their unsuspecting workers), because they were only concerned with present-day profits and not what could happen long in the future.

The legal term for the claim associated with not telling workers that they were being exposed to asbestos fibers is failing to warn of known danger under a theory of negligence. There can also be a second claim made for negligently manufacturing a defective product. The negligence is based on the fact they were knowingly manufacturing a toxic product for use in homes, schools, hospitals and other buildings and vehicles.

In the case of the old Dracut Town Hall building, work has come to a standstill while the new multimillion dollar replacement sits on an adjacent parcel of land.