A former employee of General Motors has been awarded $3 million by a New York jury, which found the worker’s mesothelioma was a direct result of exposure to asbestos contained in the products the company manufactured. 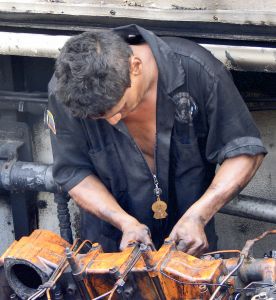 Our New England mesothelioma attorneys know that the auto industry was one of the largest offenders in terms of exposing its workers to asbestos fibers, which are the only known cause of mesothelioma, a terminal cancer. The span between exposure and diagnosis is often decades, which means we are just now beginning to see cases filed on behalf of auto industry employees who worked for companies like GM in the 1940s through 1980s.

This case, according to local news reports, stems from a now-deceased worker’s employment at GM between 1964 and 1979. His job was to repair valves that were manufactured by a firm called Crane Co. His duties required him, at least in part, to remove asbestos from the gaskets. Doing this released asbestos dust. As you probably know, asbestos when left undisturbed may not pose any significant risk. However, when it becomes friable and airborne, the fibers are inhaled in the lungs and form scar tissue that can develop into ailments like asbestos or pleural mesothelioma.

This plaintiff had been retired for several years when he was diagnosed in late 2010 with mesothelioma. He was 77 years-old when he died a year later.

A lawsuit was filed on his behalf by his wife and adult daughter, who is disabled.

During the course of the trial, the issue of “safe asbestos exposure” was weighed after being presented by the defense. Of course, this is a common tactic sometimes employed by asbestos defendants. Because they can’t get around the fact that they exposed workers to the substance, knowing it was dangerous, they attempt to argue that the amount of asbestos was so small as to be too insignificant to manifest itself in the form of cancer. Of course, this is not true. Many medical doctors and researchers have debunked the theory of a “safe exposure amount.”

The jury concurred, and awarded the widow and her daughter $3 million in damages, a portion from GM, a portion from Crane Co. Other entities settled with the pair out-of-court.

GM is one of many companies that used asbestos well into the late 1980s, knowing that it was dangerous and without providing any type of warning to employees or consumers. Many of the asbestos cases against the company stem from its clutch facings and brake linings. Some of those who worked for the company and may have been exposed to asbestos include:

The company does have an asbestos trust that was established following its 2009 bankruptcy, which was partially the result of nearly $640 million in liability for asbestos claims. (It’s worth noting, however, that the industry was already struggling at that point.)

Even when a company has an asbestos trust, plaintiffs can still choose to file a claim on their own. It’s usually a longer process, but if successful, the payout tends to be more substantive.