There is no denying the space program in the United States is not like it once was.  The shuttle program ended years ago, and neither NASA nor the U.S. government currently have any ability to send manned rockets into space.  For any manned space flights, NASA must rely on Russia’s space agency to take astronauts to the International Space Station (ISS) using their aging Soyuz rockets.  While it is true that without the shuttle program, ISS could never have been built, the remaining shuttles have had their engines removed and were sent to museums for permanent display.   There are three remaining shuttles which are the Atlantis, Discovery, and Endeavor, which are now all tourist attractions. 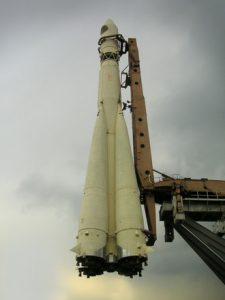 This is not to say there will never be manned space program, as a Mars mission capable rocket is currently being developed, and two private companies are handling unmanned space flight for the time being.

However, it wasn’t always like this.  The U.S. once led the world in the so-called space race and had many powerful rockets being constructed around the clock, such as the massive Saturn V launch system that took astronauts to the moon.  These massive rockets and many others were made at a large factory in California by a company called Rocketdyne Propulsion & Power.  This factory closed a few years ago, as it was no longer needed, and now it is being razed so the area can be used as what developers are calling a sustainable urban neighborhood.

While this may be a better use for the land than an abandoned rocket factory, it will not be an easy job, since they first must find away to get rid of a lot of toxic chemicals, including asbestos, that has been accumulating for the past 61 years at the factory and, as it turns out, in the ground upon which the factory was built, according to a recent news feature from the LA Daily News.

The reason asbestos was so heavily used is because it has a rather remarkable ability to resist heat, caustic chemicals, fire, and electricity. There are a lot of reasons that is important when building a rocket. Rockets are typically fueled with highly corrosive and toxic chemicals.  Asbestos was used to prevent fuel leaks and damage to other parts of the ships.  Asbestos was also used as a component in early heat shields.  When a space capsule of shuttle reentered earth’s atmosphere, it would undergo a period of extreme friction that would generate extreme heat.  To protect the spacecraft and the occupants, a heat shield is used to deflect the radiation.  While ceramics are used today, asbestos was once the substance of choice. Asbestos was also used to seal separations in tanks to prevent what happened when the Challenger exploded.

In order to safely demolish factory, a professional asbestos abatement contractor will be needed to remove the asbestos fibers and make the area safe.  Other types of hazmat removal contractors will also be necessary.  If anyone is subject to the deadly asbestos fibers, they are at risk for developing malignant mesothelioma, which has been the basis for many lawsuits in Boston.