Although one can’t control the weather, property owners should brace themselves for the fact that major storms could result in destruction that could heighten the risk of asbestos exposure.

This was illustrated in the Denver area recently, when the city was hit with a major hailstorm.  There were dramatic images captured at the Colorado Rockies’ Mile High stadium, with Coors Field being slammed with hail the size of golf balls. 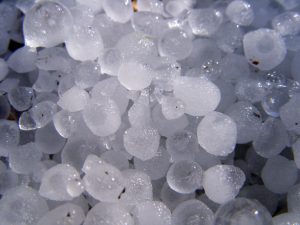 While people are normally concerned about hail doing damage to cars or possibly causing personal injury if the pieces are large enough, they are not normally associated with an asbestos exposure scare.  However, this was exactly what happened in the case of one elementary school that is now closed, according to a recent report from The Denver Post.

The school is closed for at least a few days because of an asbestos exposure concern caused by the hail damaging windows.  In fact, around 100 windows were smashed by the large pieces of hail.  While glass of the era when the school was constructed is primarily made of silica or silica dioxide (sand) that does not contain asbestos, the window putty that holds some of this older glass does contain deadly asbestos fibers.

As our Boston mesothelioma attorneys can explain, while asbestos is normally known as being resistant to heat, fire, electricity, and caustic chemicals, it also has remarkable properties that make it an ideal chemical bonding agent.  This allowed asbestos to be use in many construction applications, such as drywall compounds, glues, cements, and window caulking, just to name a few.

However, once the widows were set and all the debris was cleaned up, the school was generally safe, as there is little risk that anyone would ingest the deadly fibers.  While it is always possible a school-aged child will peel the chalking off and get it on their hands or even eat it, this was not the biggest risk, though it did happen.

Once the windows were broken, however, all bets were off, and there was a real risk of asbestos exposure. This means that the school had to be closed to test the material.  It should be noted that, even when everyone knows some material contains asbestos, the law generally requires it be tested anyway. This allows the asbestos to be typed.  If asbestos is capable of being crushed under the power of a human hand, it is classified as friable asbestos, which is generally the most dangerous type of asbestos you will find today, because, when it is friable, it is able to give off a lot of dust.  If a person inhales or ingests that dust, they are at risk for developing malignant mesothelioma.  This can take between 20 and 50 years, and that is why so many people get diagnosed with mesothelioma so long after initial exposure.