In a tragic and baffling case, a California football player died recently from mesothelioma after fighting the illness for more than a year, the Pasadena Star-News reports. 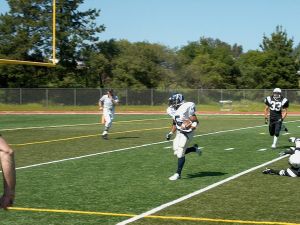 Mesothelioma has many symptoms, which often makes it difficult to diagnose. Long-time mine workers, those who worked in the military or other factory jobs may be most at risk. But others, who worked in offices made with asbestos may also be at risk and if employers knew of the risks but exposed employees to potentially harmful products as a result, they should be held accountable for their actions.

The Pasadena High School football standout died recently after battling mesothelioma for about a year. He survived cardiac arrest twice over the past several days to fend off death, but his family recently pulled him off life support at the National Institute of Health.

According to news reports, the teen was plagued with health problems ever since March 2010, when his heart stopped during a medical procedure to drain fluid from his chest. Despite that, he played linebacker in his senior year.

He was hospitalized five times in May as local doctors struggled to diagnose what was wrong with his body. Recently, at the Mayo Clinic in Scottsdale, Arizona, doctors discovered that Lacy was suffering from mesothelioma. The tumors filled his chest and pressed against his heart, restricting blood flow. And after a year, his battle ended. It’s unclear whether Lacy was exposed to asbestos or how he might have contracted the cancer.

It is a sad story and one that thousands of family members throughout the United States are keenly familiar with. More than 2,000 new cases of mesothelioma are diagnosed each year. And the median life expectancy after diagnosis is only about 12 months.

This is an odd cancer because it can form over 30 or 40 years after exposure to asbestos and then move rapidly. Asbestos is a natural mineral that was mined from 1919 to 1990 in the United States. And while it has never been banned in this country, it is rarely used because of its potential health risks.

When people inhale microscopic asbestos fibers either from old buildings or from working in factories, the fibers travel through the blood system and line the wall of major organs, such as the lungs and heart. There, they cultivate for years and sometimes decades before presenting the following symptoms:

•Shortness of breath •Fluid between the lung and chest wall •Fatigue or anemia •Wheezing, hoarseness or cough •Coughed up blood •Abdominal pain •Problems with bowel
But by then, it is typically too late. As in the case of the football player, doctors sometimes have difficulty making a true diagnosis and all the while, the cancer is developing. By the time a specialist comes into play and makes a correct diagnosis, it’s usually too late.