An historic New England jail might become a tourist attraction if money can be allocated to handle the much-needed renovations, which include a large-scale asbestos abatement project. 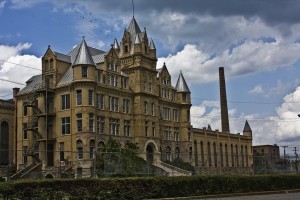 This particular jail, with its stone walls, has housed a variety of prisoners throughout its long history. For example, a tavern owner was sentenced to 60 days in prison for violating the Volstead Act in 1922, according to recent news feature from CT Now. For those who study history, or used to watch Boardwalk Empire on HBO, you will remember the Volstead Act as the federal law preventing the sale of alcohol and better known as Prohibition.

While this was a federal offense at that time, in the 1920s, federal offenders were sentenced to state and local jails, as there was not a federal prison system for civilian offenders as there is today administered by the Federal Bureau of Prisons. While this was a jail, which at times housed dangerous criminals, it was also known as the “Country Club,” because inmates were often allowed privileges not available at other prison facilities in the New England area.

Inmates who exhibited good behavior were allowed to use the prison farm to grow vegetables they were allowed to eat, milk cows, and cut wood in a timber lot near the prison grounds.   There was also a field by the river where inmates were allowed to play baseball on Saturdays when the weather was warm enough. The tavern owner said following his two-month stay at the jail, he had eaten so well while being housed there that he managed to gain five pounds and that he had never felt better.

This jail was constructed 170 years ago, renovated at various times during its operational lifespan, and has become local and federal landmark. However, it is also known to contain a great deal of asbestos-laden materials, which has now become a problem affecting its future use. As our Boston asbestos exposure attorneys can explain, historically, asbestos was heavily used during nearly all aspects of production and construction. While asbestos is a naturally occurring substance comprised of six silica compounds and has been used by humans for thousands of years, it was heavily mined and used beginning in the industrial revolutions of America and Western Europe. The reason asbestos was used to the extent it was is because it is cheap to mine and refine and has excellent abilities to resist heat, fire, caustic chemicals, and electricity.

The jail has been closed for many years and has been left to deteriorate, but town officials and public interest groups have been working for the past few years to rehabilitate the old structure, so it can be used as museum. One of the major obstacles is to raise money to handle the asbestos abatement process, so that it will be safe for tourists to visit. There will also be significant costs in getting the old building up to code with modern fire suppression systems, emergency exits, and ADA complainant features so visitors with disabilities can also enjoy visiting the old jail.