According to a recent news article from the Millbury Sutton Chronicle, local legislators have finally been successful in their long-standing effort to find funding to renovate the Grass Hill School. This historic school was constructed in 1861. The town operated the school until 1968 when it was closed. A local historical society championed a project following the school closure to have it restored and named a National Historic Landmark. The society also wants the old school added to the Register of Historic Places for the Commonwealth of Massachusetts. 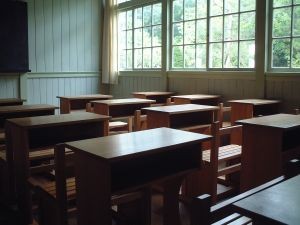 As part of their bid to have this old school named an historic place on the state and federal lists, there needs to a serious amount of renovations to make the structure safe for public use. Even if it is never used as a school again, in order to use the property as museum or local office building (it is common to use historic Massachusetts buildings for local municipal offices) it must be upgraded and made compliant with building codes. However, before any work can be done, the city must deal with removing the asbestos known to be present in the old school.

Knowing that asbestos was a major concern for those in the town with respect to re-purposing the building, two local representatives who fought for funding to renovate the structure stressed the need for asbestos abatement work on the project. There is also an abandoned building located on the same parcel of property as the school, and that building is owned by the town of Millbury. Funding for asbestos abatement and demolition for the abandoned building was also sought in the recent budget cycle. In the 2016 state budget, it was recently announced that $105,000 has been earmarked to help pay for the two projects involving the old school and the abandoned building that is located on the same parcel of land.

It may seem odd that there must be an asbestos abatement process in a building that is already going to be demolished, but as our Boston mesothelioma illness attorneys can explain, there is a big difference between how the asbestos abatement process works and how the demolition process works. Unless we are talking about tall building in the middle of a city, where demolitions experts carefully place charges to cause the structure to implode in contained manner, demolition work normally involves the use of laborers with saws and hammers and a wrecking ball.

The work is done in a way to prevent anyone from being injured in process, but it is not exactly a precision operation. Proper asbestos abatement is done as a more surgical process as opposed to the wrecking ball approach. Trained workers remove the asbestos-laden material while creating as little dust and waste as absolutely possible. Once the asbestos abatement process is complete, a regular demolitions crew can get to work.

During the asbestos abatement project, the asbestos debris is placed in a container, wet down and sealed, and taken to an approved hazardous waste disposal facility. During a standard demolition project, the debris is thrown in ordinary construction waste dumpsters and hauled away to the local landfill.