Here we are in 2012 and companies are still not taking proper precautions to remove asbestos from buildings, despite detailed regulations about how it should be taken out.

As our Mesothelioma Lawyers Blog has reported time and time again, schools throughout New England have been discovering that they were built with asbestos and are now attempting to remove it from the premises. That’s certainly a good step, but one that is long overdue. 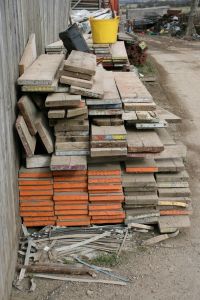 Our Boston mesothelioma lawyers believe that asbestos removal from buildings is one of the most important parts of a remodeling or construction job. While there are obvious issues relating to the structure of the building that must be addressed, if asbestos isn’t properly removed, it can lead to major medical problems not only for the workers, but for the people who frequent the building as well as the environment.

While contractors have a lot on their plates and many responsibilities, they cannot let down their guard and overlook the dangers of asbestos exposure in Massachusetts. If this natural mineral is improperly removed and gets airborne, many people can be put at risk, especially if it gets into a water source.

When asbestos becomes airborne, that’s when it’s at its worst. When people ingest asbestos, usually without knowing it, it travels through the person’s body and attaches to major organs. That’s where the cancer forms and stays hidden usually for decades and sometimes up to 50 years before the symptoms arise.

By that point, the cancer is so advanced little can be done to help. Surgery is too risky and most treatments are unlikely to make a substantial difference. Yet, some contractors don’t take things like this into consideration. They are more focused on finishing the job quickly rather than following all the rules.

The Massachusetts Department of Environmental Protection recently announced that it was fining a Southbridge company $18,187.50 because of improper asbestos removal procedures.

According to the department, the company removed asbestos-containing siding from a residential property that the company owns. When department officials inspected the site in November 2009, they allegedly found that the company removed the asbestos without providing prior notification to the department, as required. They also failed to properly handle, package and dispose of the asbestos. Inspectors found many pieces of shattered asbestos shingles on the ground and in dumpsters on the property.

The company was required to immediately hire a licensed asbestos contractor to remove the asbestos. The department fined the company $4,000 and agreed to waive the remainder as long as there are no violations in the next year.

Contractors often will pay closer attention to the issue when they get hit in the wallet. But, sometimes money isn’t going to make up for the potential hazards done by asbestos exposure. Even a quick amount of exposure can lead to deadly affects years or decades down the road. That’s why construction crews must take the time to follow the law.