As The Medford Transcript recently reported, the Medford Police Department has ignored for years the health risks associated with exposed asbestos, which was found in its building years ago. Boston mesothelioma lawyers have noticed the department’s safety issues and how city officials are finally looking to take action to correct the situation. But the police department is not alone when it comes to concerns about asbestos. 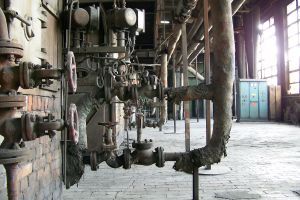 According to The Boston Globe, officials in 2009 were supposed to properly remove asbestos-laden tiles based on guidelines and standards determined by the state. But instead, they took the tiles and dumped them in a trash container behind the school. The container was then moved to Columbus Elementary School before being brought back to the high school and decontaminated.

Now, the police department has come under fire because state officials mandated that problems such as exposed asbestos in the building’s boiler room be addressed five years ago, but nothing has been done.

City council members recently toured the building, which is fraught with other problems as well. Among the concerns are that jail cells are unusable, the firing range has been condemned, equipment and evidence rooms are cramped, and there are no gyms or showers for female officers in the building, which was built in 1962.

A photo from the newspaper shows council members walking in the boiler room, unmasked, to inspect it. Knowing that the pipes are coated with asbestos, people shouldn’t be walking around it without protection.

Aside from it being old and not up-to-date, it also poses other health concerns. According to council members, there is widespread mold because of water leaks, especially on the roof.

There are examples of people who worked in the trenches of asbestos dust or in factories or mines where they breathed it in all day who get mesothelioma later in life. But there are also many cases of people who were exposed over a short period of time. And they find out decades later that they, too, have formed mesothelioma.

Researchers don’t know enough about mesothelioma to figure out how much exposure is needed to cause it. The disease varies based on the victim, duration of exposure and conditions. But it is clear that even a small amount of exposure can kill.

Medford officials must take this seriously and take action on the asbestos situation in the police department and other buildings in the city that likely were built with asbestos. Its schools have put children at risk and now its police officers have been at risk for decades. Let’s hope officials do the right thing, and do it now.

The Law Offices of Jeffrey S Glassman provides representation of victims exposed to asbestos who have been diagnosed with mesothelioma in Boston and throughout Massachusetts and New England. Call (617) 777-7777 for a free and confidential consultation to discuss your rights.