The once proud Cleveland Public Power Plant has been sitting closed for years.   The United States Environmental Protection Agency discovered that the plant, which sits along the shores of Lake Erie, had been leaking thousands of gallons of lubricating oil into the lake. This spill occurred last Easter, and EPA ordered the plant owners to clean up the shoreline and do no further damage.   The reason for the toxic spill was because some of the older tanks and waste containers ruptured, allowing the waste contained in them to flow out of the building and into a river. 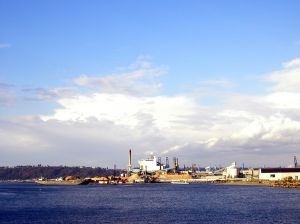 At this point, cleanup crews went to work trying to the remove the lubricant material and anything else polluting the shoreline. While the cleanup was going reasonably well, something unexpected happened when they discovered asbestos located throughout the building and in many of the tanks that had ruptured, causing the problems in the first place. As if this was not bad enough, many of these tanks that contained asbestos were fully submerged in the wastewater flowing out of the building. This made cleanup efforts extremely difficult and costly. The flooding was so deep that some of the tanks were under 13 feet of wastewater.

At this point, the city council knew something had to be done, and done fast, so they contracted with an abatement contractor without a bidding war to make sure they got the lowest price. This was one of the rare occasions when a sense of urgency caused government to abandon their normally slow and painstaking bureaucratic process and hire a contractor on a no-bid contract, because the contractor was needed as soon as possible.

In order to accomplish this task, the city council and the EPA need to get together to decide on a consent degree, so there will be oversight when all work is being performed. This is a matter of policy in any large-scale asbestos abatement project. This particular project is expected to cost around $1.7 million before all is said and done.

In this particular series of incidents, it is not hard to see why there is a lot of blame being thrown around by the various interested parties. The city council is blaming the EPA for not performing inspections soon enough. They said that if the EPA had been vigilant in performing its inspections, the asbestos would have been discovered much earlier in the job, and this would have allowed for a much quicker and cheaper asbestos abatement process.

Anyone who was exposed to deadly asbestos fibers and has developed mesothelioma, asbestosis, or other types of respiratory illness should speak with an experienced Boston asbestos injury lawyer as soon as possible to learn his or her rights. Due to the deadly nature of mesothelioma, it is often surviving family members who end up participating in the lawsuits.

It is also important to note that, while there is no question that asbestos caused a particular case of mesothelioma, the challenge for plaintiffs is often proving when and where they were exposed. One of the best things you can do is to write a list of every job you have ever had. You should also contact your coworkers at those jobs to see if they have been sick or have a similar recollection of facts as you.