As those in Massachusetts and throughout the East Coast begin to recover from the punishing wind and flood damage caused by Hurricane Sandy, the massive storm has given rise to another concern: asbestos exposure. 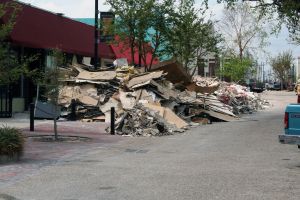 Boston mesothelioma lawyers understand that although the storm didn’t technically make landfall until it reached New Jersey, the winds punished a large swath of the Massachusetts coastline, toppling power lines and trees, causing power outages and, in some cases, damaging older structures.

It is the latter of these that causes the most concern, in Boston, as well as in the harder-hit areas of New Jersey and New York City.

These are comparatively older cities, with many structures built before the mid-to-late 1980s. It’s estimated that up to 35 million schools, homes and businesses contain asbestos at least in some levels, according to the U.S. Environmental Protection Agency.

Many construction companies and manufacturers that used this material knew of the dangers, following an epidemic of mesothelioma and asbestosis among asbestos miners.

Some of the building materials for which asbestos was used include:

In Boston, these materials have been identified in numerous schools, government buildings, office structures and homes.

Generally speaking, the material isn’t harmful unless it’s disturbed. That’s why anytime there is renovation occurring where asbestos is present, state environmental law requires the hiring of a contractor who is experienced in safe asbestos removal.

However, hurricanes don’t follow state law, and this one appears to have potentially disturbed a large number of older structures that contain asbestos. Specifically, it has torn off roofs, ripped apart walls containing asbestos insulation and exposed asbestos-laden piping.

As long as its wet, this may not be a major concern. However, as the exposed material begins to dry, it becomes more friable, which means the particles are more likely to become airborne. This is when it is especially dangerous because it’s those airborne fibers that become lodged in the lining of the lungs with deadly consequences.

Unfortunately, these microscopic fibers aren’t generally visible except when there are large heaps, and there is no distinct smell or taste to warn the victim.

It’s important for those digging through the wreckage for any valuables to be aware of this risk, and use proper respiratory protection if necessary. If you aren’t sure whether the home or structure had asbestos, better to err on the side of caution. If at all possible, hire a professional to help, and avoid activities that are going to generate dust, such as vacuuming or sweeping debris that may contain asbestos.

Another concern is that some of that debris could have contaminated the water supply as the storm surge created massive flooding.

We tell you all this not to create a further scare, but to warn you so that you and your loved ones may take proper precautions to protect yourselves.

We wish everyone affected by Sandy a swift and safe recovery.