Even if you have never been there, most people are familiar with what the giant silver arch in St. Louis looks like. It is a must see for anyone visiting St. Louis or traveling through the area.   The Gateway Arch is the largest of its kind in the world and is part of the Westward Expansion Museum. There is an elevator in the arch that takes riders to the top, so they can look through observation windows. 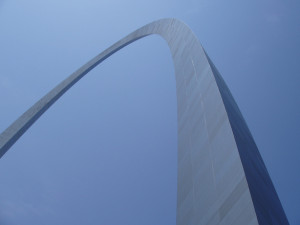 The arch was constructed in the 1950s, and it is not surprising that asbestos was heavily used during the construction, because such use was very prevalent during that time in American history. Asbestos is a naturally occurring mineral that is actually comprised of six different strains of silica. It was once heavily mined from the earth and used in virtually every aspect of production and construction during the industrial revolution.

The reason asbestos was so heavily used was because of its remarkable ability to resist heat, fire, electricity, and caustic chemicals, and its ability to serve so effectively as a binder. A binder is used to stabilize two different substances. It is very useful in glues, cements, and joining compounds, such as those used in construction.   One product that was used a lot and also caused a lot of damage in terms of asbestos exposure and mesothelioma is known as gun plastic cement.

The problem with asbestos is that the fibers are deadly to humans. When inhaled, they can come lodged in the layer of tissue know as mesothelium and metastasize into the deadly form of cancer known as pleural malignant mesothelioma. It can also cause lung cancer, asbestosis, and other forms of respiratory illness. It should be noted that the mesothelium is also located in the stomach and check cavity, so mesothelioma tumors can develop there as well.

Our Boston mesothelioma injury attorneys know now that manufacturers working in the asbestos industry were well aware of the dangers of asbestos to humans, but they also knew it would take between 20 and 50 years for most of them to get sick, so they were willing to trade present-day profits for the future health of others.

The Gateway Arch has been undergoing an extensive renovation for quite some time, but it has remained open to the public, as it was not believed the renovation would affect visitors. However, according to a recent article from St. Louis Today, a group of workers were performing renovations when they cut into a pipe covered with asbestos. At one time, it was common for pipes to be wrapped with a white insulation material consisting mainly of asbestos.

The superintendent for the Gateway Arch renovation project said he is not sure how many people were potentially exposed to asbestos fibers but said it includes an unknown number of workers, as many as 100 designers, employees of the park service and guests at the construction site. He stressed that general public was never at risk for being in contact with the deadly asbestos fibers.